They fuck you up, your mum and dad.

They may not mean to, but they do.

They fill you with the faults they had

And add some extra, just for you.

So says Phillip Larkin. While I’ve long admired the rhyme, I’ve also always thought ‘ooerr that’s a bit harsh and misanthropic’. But then if I HAD to level one fault at my own loving parents it would be the crime of hoarding.

The accumulation of stuff, the refusal to deal with said stuff and the subsequent slow drowning in it – a bit like being trapped in a sealed room being flooded by the worst showerhead in the world. Throughout my childhood there was always at least two rooms in the house that were no go zones due to the ‘kipple’ – you couldn’t even get in through the doors. It was a little like the Crystal Maze, if you were stupid enough, you might get trapped inside. I’d call it child abuse how I grew up but I seem to have turned out alright.

Last weekend I went to my parents’ house and nothing much had changed. But then nothing has changed in the oh, I dunno, 25 years since we all moved to Earl Road – the house completely survived the Carole Smiley pandemic of 1996 to 2004 and the same wallpaper inherited from the previous owners is still hanging – ‘expensive stuff that’ mind

Famously one year my mum ‘hid’ my dad’s Christmas present – a drum-kit – by just putting the box in the middle of the dining room, it was immediately absorbed into the surroundings and he never noticed a thing. 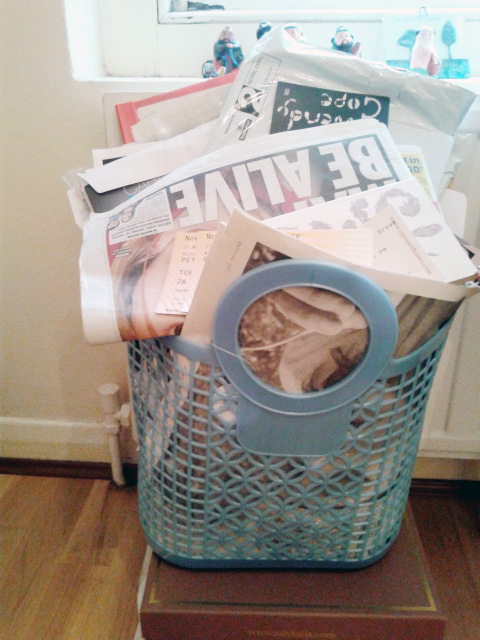 When it comes to hoarding, my parents are decidedly middle-brow. There’s the harmonium in the hall that only gets played on Christmas morning  for about five minutes until everyone starts moaning – mostly about my singing. There’s also an unused kitchen cooker in a box.

There’s piles of books next to piles of unmatched socks. On climbing the stairs I spied on the landing a mohair jumper of my mum’s that I’ve always rather coveted but that has now become one of the cat’s many beds. When I asked ‘what the hell?’ Mum replied: ‘oh but the cat likes it’. It’s sheer madness. I’m making it sound like the seventh circle of hell but it’s actually all rather cosy – providing you can find an empty chair.

You may wonder where I’m going with this but far from just mindlessly bashing my parents, this is actually a confession –  I am a shameless hoarder too. Not for want of trying not to be. I still have such regrets about that grey DisneyLand Tokyo sweatshirt that I dropped in a bin liner during one highminded but naive clothes cull when I was 10 years old.  It would have looked so ironic and cool now. And the Doc Martens I dropped off at the charity shop when I was 20 – obviously back in fashion! Meanwhile I’m pretty sure I have every single ticket to every single cinema trip and gig since I was about 14, in a box, well three boxes now. One day I’ll make a scrapbook of all those memories..

It’s in the marrow. So when I caught myself squirrelling an old theatre ticket into a pile this week I had to hold my hands up and admit it – you might as well call me Mr Trebus. I’m destined to be found 60 plus years from now under a pile of newspapers having built my own funeral pyre. 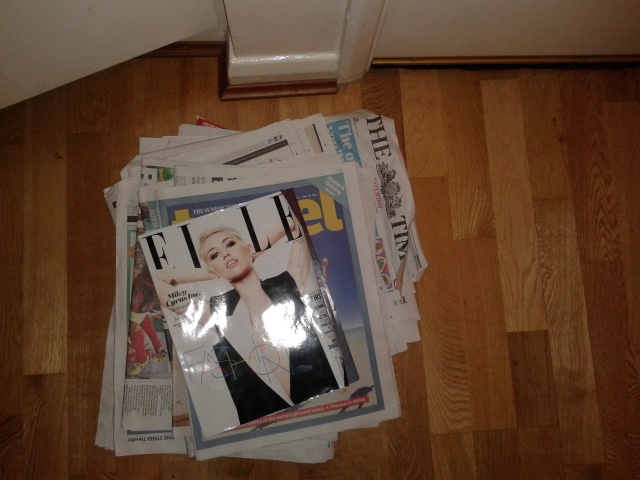 Luckily my boyfriend is borderline OCD about tidyness, which means it’s like having a little pixie fairy who follows after me, clearing everywhere I go. My major refrain at home is ‘I will sort that pile out later’ and ‘this weekend I’ll do the bedroom’ but we both know it’s as likely as him being able to resist uprighting a book I’ve perused and then idly stuffed back into the bookshelf at a horizontal angle. 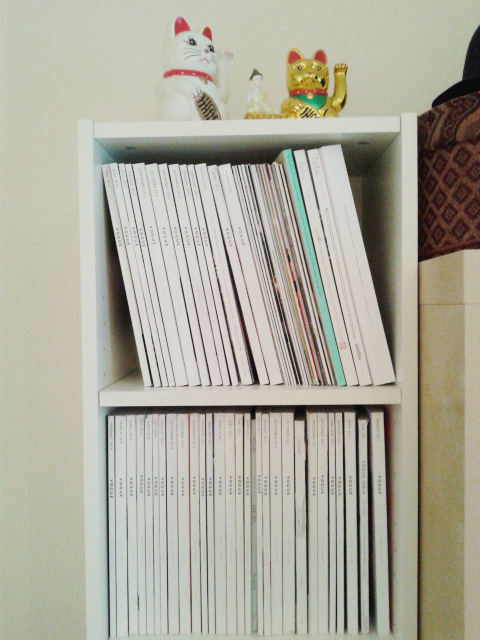 The pixies tidied up my Vogue collection while I was out. Clever pixies!

So what if I like nothing better than to sleep with at least two Sunday newspapers in bed with me throughout the week – that way you can wake up and carry on reading whenever, right?  So what if I have every issue of Vogue since 2002 and struggled to throw away old birthday and Christmas cards? When it comes down to it, I will defend to the death my right to fill drawers up until they are unable to be opened. Why shouldn’t the parking permits go in the draw full of cables? Who says hunt the passport can’t be a fun game for two to play?

Unlike Larkin, I reckon there comes a point when you have to take some ownership over your own behaviour – it’s certainly not going to stop me giving birth to my own little hoarders. Organised people lack imagination I say and there’s already not enough time for the important stuff in life, like vodka and discussions about the gender of next door’s cat. And for that outlook in life, I am truly grateful to my parents.

1 Response to What a hoarder.