THE LOST ART OF FEMININE ALLURE A.K.A MY BREAK-UP WITH SHAKIRA

Rachel… on the changing face (and ass) of role models. And how good it feels to clear your mind of mixed messages and your shelf of  unread books… 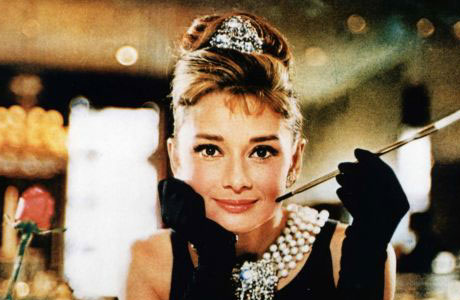 Like many a girl growing up, I collected every mass-produced print of women such as Marilyn Monroe and Audrey Hepburn and stuck them with disobeying blu-tak all around my bedroom walls. The plan was to stare at their impossibly elegant, mysterious and iconically sexy forms for a few minutes each day, and in doing so, unearth their secrets and grow up to look and be just like them. This was basic osmosis.

But science failed me. At 15 years old, I could be found drinking cider, smoking fags and kissing boys (the sort who steal marker pens from WH Smiths), in my local park. I wore pink velour tracksuits (mainly), at least eight (fake) gold chains, copious amounts of fake tan, a push-up bra containing two chicken fillets, three inches of foundation and half a bottle of Charlie perfume. I was many things, but elegant, mysterious and Marilyn Monroe were not amongst them.

But that didn’t matter, not anymore. Not since I had discovered boys and in doing so, realised they didn’t want the glamour and grace of Elizabeth Taylor, they wanted Christina Aguilera gyrating in crotch-less trousers singing about how dirrty she is. They didn’t want the charm and enchantment of Audrey Hepburn, they wanted Jodie Marsh with a belt across her tits. This was the new sexy and I was definitely it.

I am now 25 and due to two recent events in my life, feminine allure has once again come to the forefront of my mind. The first was finally getting around to watching the music video to Rihanna and Shakira’s song “Can’t Remember to Forget You”. At this point, it is worth noting that Shakira has been the single most influential role model in my life since she danced with horses and rolled in mud when I was 13. Admittedly she was never one to shy away from expressing her sexuality, but to my mind at least, it was done with taste (in all her music videos accompanying songs from her first two English albums, she got dressed) and with talent (she had bothered to learn an incredibly disciplined style of dance – not just sexy, inspiring). Shakira is multi-lingual, she runs a charity supporting education in Africa and has demonstrable musical ability. To me, she stood out from the usual shit storm of naked, auto-tuned, air-brushed imitations that were, so far, all I had known.

Watching ‘Can’t Remember to Forget You’, I sat back as two women, who, in order to demonstrate the lyrics fully, lie on a big bed wearing thong swimming costumes, stroke each other’s arses and puff on cigars. Then, clearly unsure that their actions fully convey the message of the song (as I’m sure we all are), they take turns at miming having sex with a wall, and PHEW, suddenly it’s all clear. It’s clear that this video has nothing to do with the song or indeed music. The sole purpose of this video is attention, and we all know what gets attention…Naked women get attention.

Of course, all of Shakira’s redeeming qualities still stand and hey, the woman is free to do what she wants – she owes me nothing, but watching that video, a sadness swelled within me that perhaps only those who have watched their role model pretend to fuck a wall in a quest for YouTube hits can really understand. But my issue wasn’t with what she did, it was what it represented.

Times have indeed changed and so have the role models. We live in a society of instant gratification – we want it all and we want it now. Of course there are women in the public eye that are clothed and manage to get attention. Just not as much and not for as long. The message is abundantly clear, if you want attention, (male or otherwise) the quickest and most efficient way to do it is to take off your clothes, speak as crudely as you can and thrust your genitals as hard and as far as you can. Wall optional.

Naturally there are those to whom writhing around wearing next to nothing is symbolic of female empowerment. I get that. Attitudes have changed towards female sexuality and that includes, above anything else, the attitudes of women ourselves. It is, of course, no more capacitating to be told “Don’t aspire to the unisex look. Buy feminine-looking clothes…Remember that you’re dressing for men” (genuine quote taken from ‘The Rules – How to Capture and Keep the Heart of Mr Right’) in order to get attention, than it is to feel you must wear no clothes at all. My point is that it is no less capacitating either, and my real fear is that we are disguising and mistaking sexual objectification for liberation.

Either way, gone are the days of feminine allure. Allure is not desirable, it’s not mysterious – it’s conservative, prudish and all it means is that while you’re wasting time trying to capture the object of your desire’s imagination about ‘what could possibly be underneath your clothes’, someone else is showing them exactly what’s under theirs.

The second incident that got me thinking was this: I have just moved into a lovely flat that I can’t afford. It sounds like a bad idea and that’s because it is, but there is nothing like the ‘new start’ that comes with moving house to force you into analysis of all the shit you have accumulated and decide what aspects you will take forward and those you will leave behind. Possessions become elevated from merely ‘stuff you have’ to ‘reflections of what you will become’. I genuinely deliberated over a wall-clock for seven minutes before concluding ‘the woman I want to be would not have this particular clock’.

Three hours later (or there about, I had no way of knowing now) I was unloading all the items that somehow represent ‘the woman I want to become’ into my new, too expensive room. 90% of this stuff was books. Looking over the titles, it read like a library of failed ambitions. ‘Things A Woman Should Know About Seduction’, ‘The Modern Lady’s Guide To Elegance and Charm’ and books on etiquette sat alongside Marilyn Monroe biographies and a ton of (what are essentially) instruction manuals that promise to make me a ‘Goddess’.

I leafed through them all – that’s right, I barely have time to read the bastard books let alone carry out the complex routines and regimes detailed within them – and simultaneously inspired and amused myself at some of the tips, which included:

“Don’t leave the house without wearing make-up. Put lipstick on even when you go jogging”. This sentence over-estimates me on several accounts, the first being I leave my house at all unless forced, let alone the jogging or owning lipstick.

“Be increasingly fastidious about your personal grooming. An uneven hemline, run-down shoes or an untidy hairdo are always unattractive”.

At the time of writing, I am sat on the tube having just applied my make-up in front of an 18 strong audience. My outfit consists of yesterday’s trousers, the first top I could find that wasn’t stained, torn or someone else’s, a hoodie from Primark and second-hand jacket with some ketchup and mustard on the sleeve (remnants of a hot dog I ate two weeks ago). My hair is bleached blonde (the only way I can explain the shade is ‘nothing like the model’s on the front of the box from whence it came’) and snatched back in a ‘messy bun’ – partly owed to the fact I have not owned a hair brush for the last 6 years, but mainly because this is the only hairstyle I can do. To my mind, I look ‘fine’. I’d even go as far to say ‘better than usual’.

I know I could look ‘better’, ‘chicer’ or simply just cleaner, and in my ideal world I would. It was then I considered that perhaps it is simply a case of ‘too little time’ that really comes between the modern woman and feminine allure. I have no time to be fannying around trying to create the air of mystery, glamour, elegance and seduction that we have come to idolise the stars of bygone eras for. I barely have enough time to shower and the fact I know how to squeeze 8 days out of a pair of knickers is not my biggest source of pride either but hey, needs must….

That ever increasing pile of books has moved with me into six different residences over the last eight years and has so far served little more than to remind me of all I am not and fiercely instruct me on how to improve. Tonight I have made the decision to let go of them just as I was forced to let go of my Shakira obsession.

Perhaps true sexual liberation doesn’t come from taking off all of your clothes all of the time or from sewing up hems whilst tailored and manicured to within an inch of your life. In a society so eager to impress instruction and reward conformity, is it not time to take a chance and at least entertain the idea that when there aren’t any role models or instruction manuals left, it’s time to pave your own way? I for one can’t think of anything more alluring than a woman who can do that.

0 Responses to The Lost Art of Feminine Allure A.K.A My Break-up with Shakira