My very own grandfather, the poet. Show ‘em how it’s done, Grandpa… 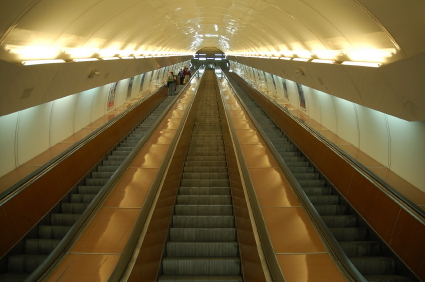 ‘The Escalator’s Wrath’ by Eric Osborne

Aunt Jane came up from Ambleside to pay her annual visit

I met her train and brightly cried “You’re looking fine, just like a bride,

Aunt Jane is 90 if a day and travels only yearly;

And this year she came early.

Down; seized up, and with a sudden jar,

Stopped; sank into some sticky tar –

I left it as a token

For others to read, mark and know as I toiled on in buses.

I told Aunt Jane we’d go below incase it should come on to snow,

For I know how she fusses.

I stammered, “can’t afford it”

At which she brandished brolley high, de-hatted one poor passer-by

And blatantly ignored it,

But meekly followed me below for she too had no money.

I bought tickets with my dough,

She cackled in the lift as though

I had done something funny.

Now at the other end were stairs – a fact I had forgotten,

For if there is one thing that scares

Old ladies, it is moving stairs,

Then thrust her brolley, bag and book

Into my arms and bravely took

One mighty plunge ahead.

By some strange means she got a grip,

I stood and watched, aghast.

But suddenly I saw her trip

And step by step begin to slip

And then start rolling fast.

That escalator dropped her.

She rolled right on beneath a train

Which decomposed her active brain

But which, however, stopped her.

On a moving stair in the Underground

Down which she fell, and round and round

0 Responses to The Escalator’s Wrath